Team Match is a 3 vs. 3 game mode that was added in February 2019. This game mode is currently in open beta testing.

In Team Match, two 3-person teams face off against each other. Each match lasts approximately 10 minutes. The first team to reach 20 player kills wins. If all the areas have become restricted and no team has reached 20 eliminations, the team with the highest eliminations wins. If the eliminations number is the same for both teams, the team with more assists wins. 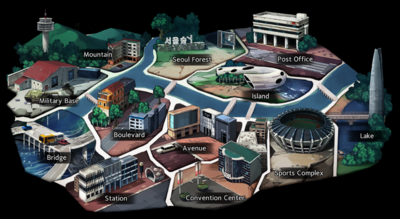 Team Matches occur within the Seoul Map. Items in Seoul are higher-rarity compared to those in Lumia Island. Teammates must communicate and strategically work together to overpower the enemy team.

Prior to starting the match, players enter the Team Lobby, where they will be matched up with 2 teammates. Players can choose their character, aptitude, and skin via the Character Choice menu.

On the right side of the screen, players can view their teammates' character/aptitude choices. There is also a Team Lobby chat option, for chatting with teammates prior to the start of the match. 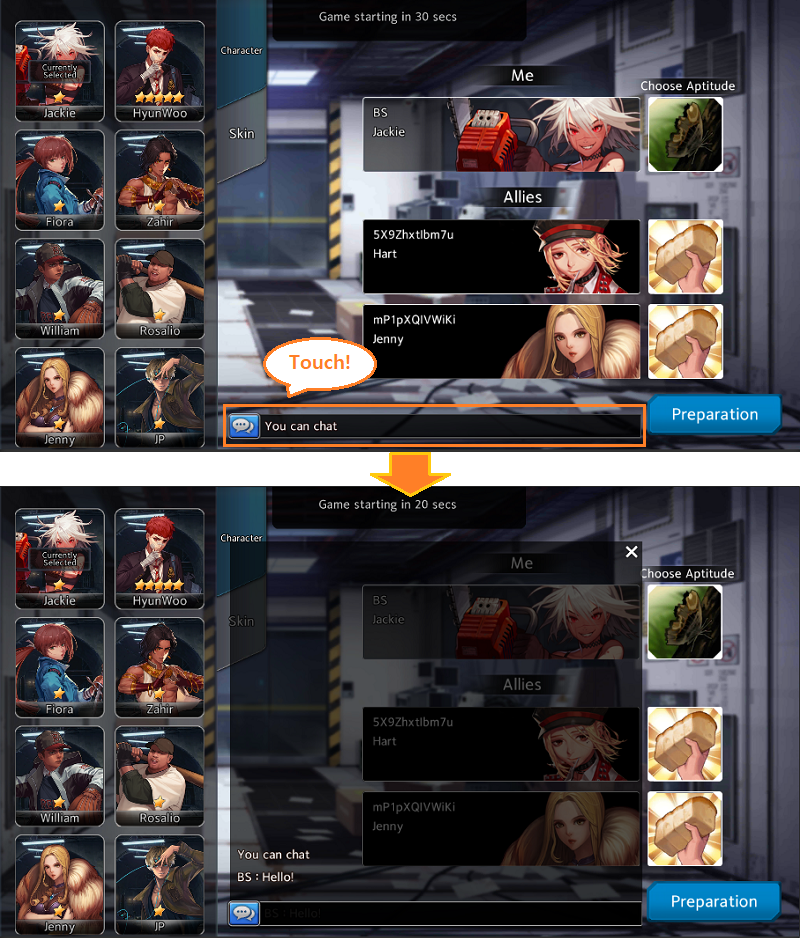 When you are ready, click/tap the 'Preparation' button. When both teams are ready the game will begin! 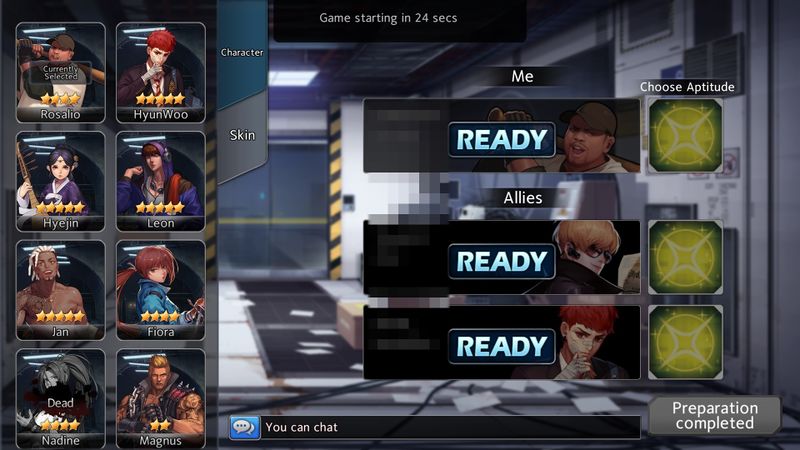 Teams of approximately equal skill level are matched together, by calculating teams' average Rank Points. The average rank of the 6 players can be viewed in the top right corner. 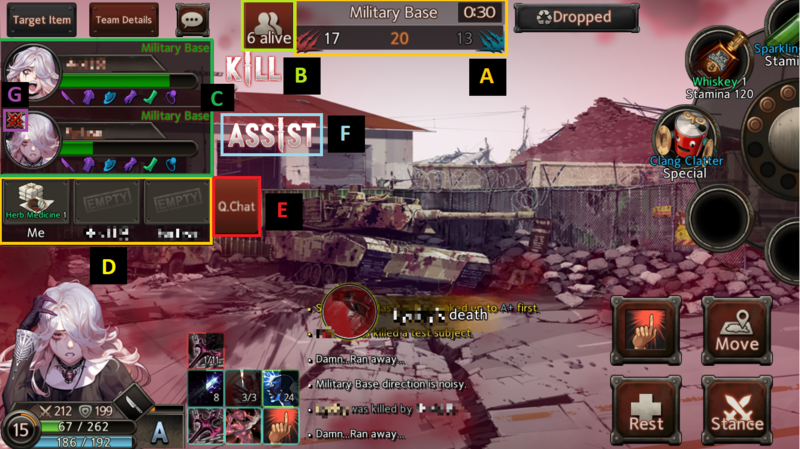 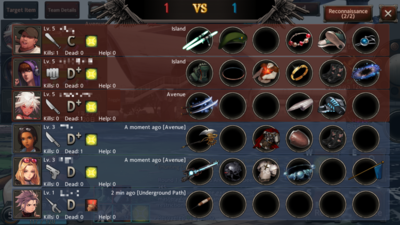 Players can select an item in their inventory and press "Share" to share that item with their teammates. Only 1 item can be shared at a time.

To take an item from the item sharing, click/tap the desired item. Players can take back items from their own item sharing slot.

By clicking/tapping within a teammate's section of the Team Details display, the player can directly teleport to their teammate's location. This allows the player to switch areas without needing to open the in-game map.

Quick-chat can be used to send preset messages to one's teammates. This allows for communication between teammates, even if they do not speak the same language.

The following messages can be sent via quick-chat: 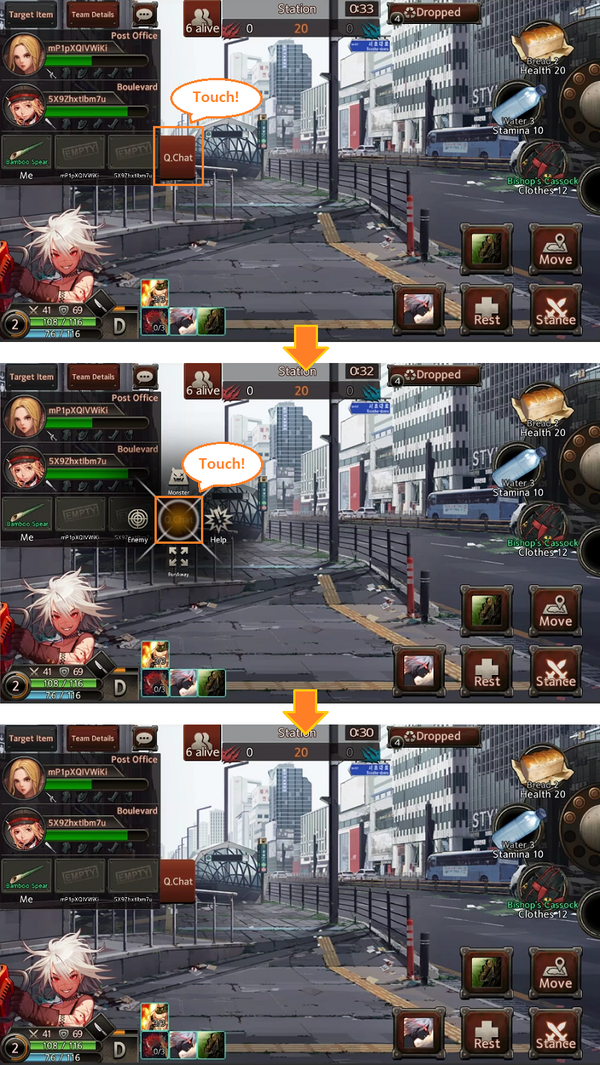 Text-based chatting is also available by clicking the "..." icon at the top of the screen.

At the end of the match, rewards are given out based on whether the player's team won or lost, the number of eliminations, and the number of assists.

When players are killed, they are taken back to Underground Path to revive. There is a short revival animation (including a timer) before players can return to an area on the Seoul map. Players with a 'Killer' mark (see below) will have an extended respawn time, further increased by each kill they accumulated. Teams receive one score point per enemy player death, including restricted area deaths and dying to animals. 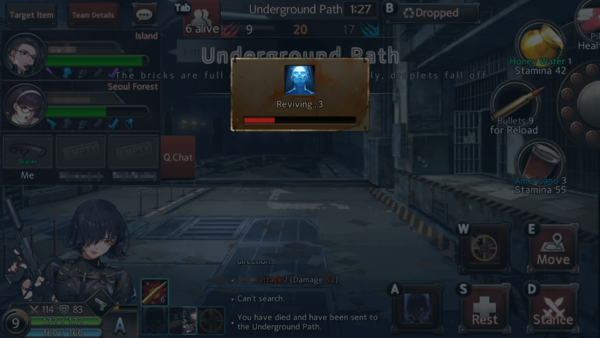 Upon reviving, the following conditions occur:

If you remain in Underground Path for longer than 15 seconds, you will die and award a point to the enemy team.

Unlike Classic Match, killed players' corpses do not appear on the map. 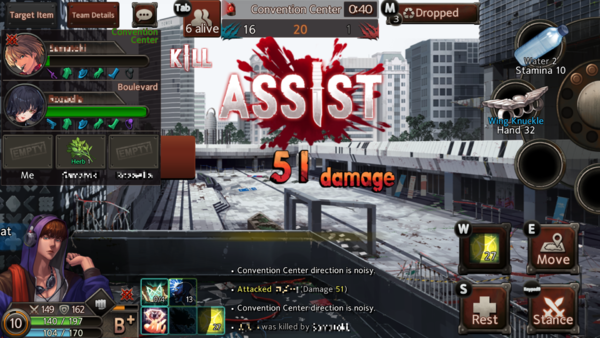 Assist points (referred to as "Help" points in the end-game screen) are factored into game reward distribution. Additionally, if both teams have an equal number of eliminations, the winning is determined by the number of assists. 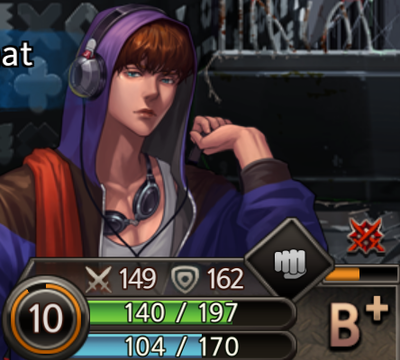 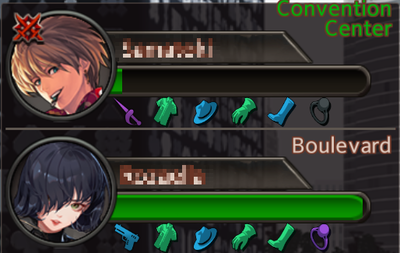 The Adaptation aptitude inflicts more damage upon enemies with the killer marker. 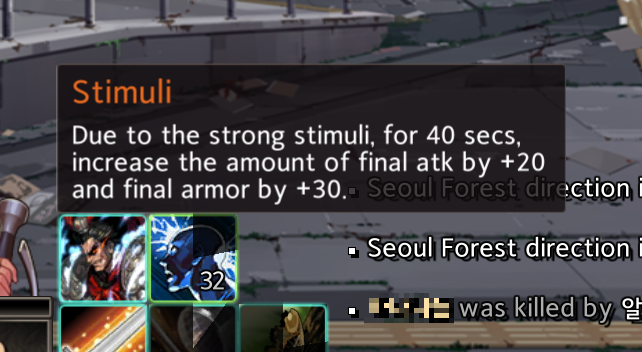 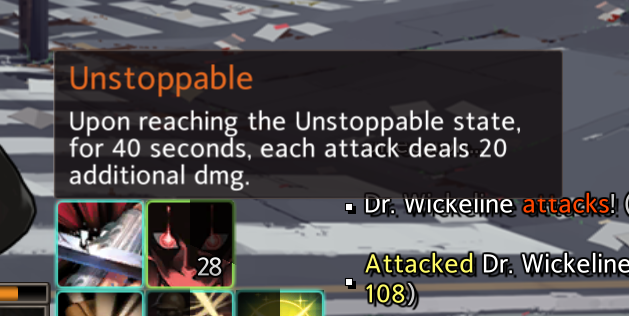 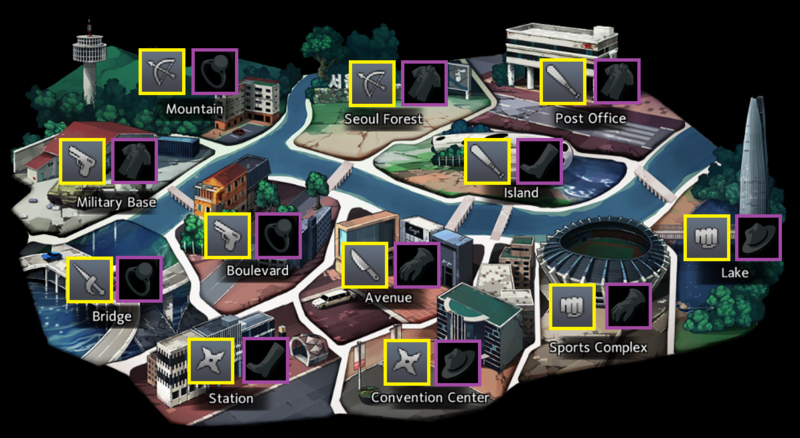 Instead of collecting low-rarity ingredients and crafting them together to make upgraded items, high-rarity items can be found immediately in Team Match, through Searching. A few crafting recipes are still possible (ex. Knee Pads + Advanced Military Boots to make Battle Boots), but generally there is less crafting in Team Match gameplay.

Most searchable items are Uncommon, Rare or Epic in rarity. Epic items cannot be found until after the second round of restrictions (4 minutes 30 seconds after the start of the game).

There are very few Health Items available in Team Match. Health items can be obtained from killing animals, or via Lenox's Fishing skill.

Team Matches are significantly shorter than Classic Matches. Team Match games last 10.5 minutes at most (the final area becomes permanently restricted 10.5 minutes after the start of the game).

Round 1 lasts 2 minutes 30 seconds, Rounds 2-3 last 2 minutes, and all subsequent rounds last 1 minute. Restricted Areas are permanently restricted starting from the 4th round.

Several characters may be prohibited from Team Match. The current list of prohibited characters can be viewed within the game main menu, via the red caution sign.

Currently, no characters are prohibited

Additionally, some character skills have different effects in Team Match than in Classic Match. These skills will have two separate icons and descriptions within the Character menu of the main lobby. For more information, see Team Mode Skills. 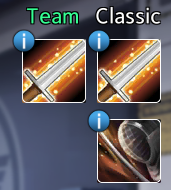 Both animal spawn patterns and item drops differ from those in Classic Mode. Each animal only spawns once, and any animal can spawn in any open area. If an animal is still alive at the end of the round, it will move to a different open area at the start of the next round.

The locations of the Gorilla, Bear, and Dr. Wickeline are shown on the in-game map, if they have spawned and are still alive. 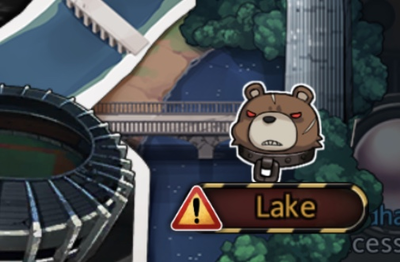 Each animal's spawn time and item drops are as follows:

Mr. Meiji does not appear in Team Match.

Additionally, each animal's stats differ from its stats in Classic Match. These differences are as follows:

Upon activation, these skills are announced to all players on the map through the chat.

Players receive the "local" message if they are attacked by the wild animal. The "global" message is sent to all players on the map. The local message is the same for both the 70% HP and 30% HP attacks. 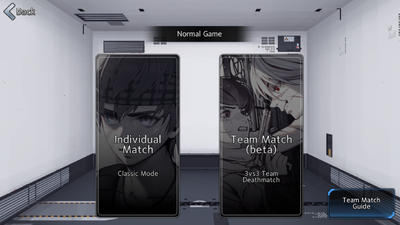 The following are screenshots from the in-game guide on Team Match. It can be accessed via the button in the bottom right corner of the "Normal Mode" screen. 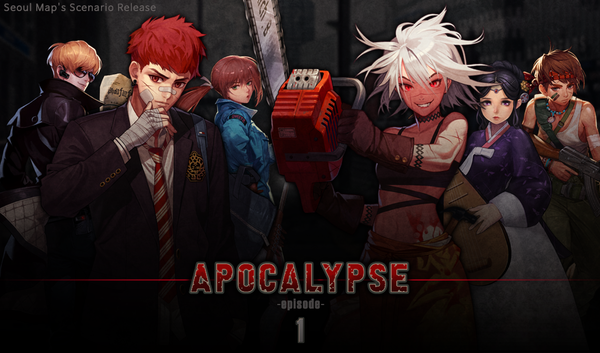 The Apocalypse series was a 12-episode short story that was published in conjunction with the release of Team Match. Each episode takes place within a different area of the Seoul map. 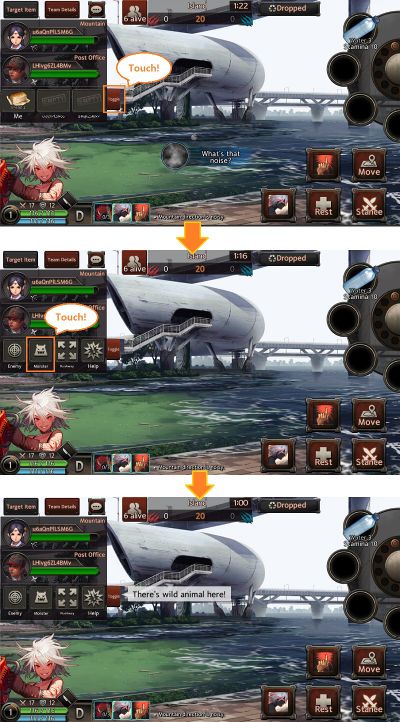 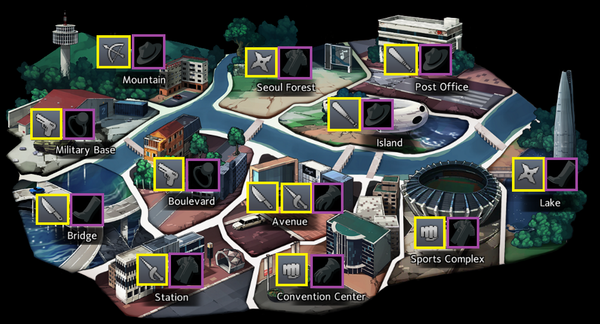